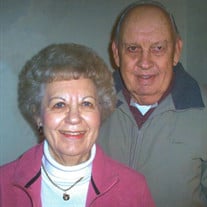 Anna Ruth Stiles Henson, born January 6, 1934, passed away peacefully at JCMCH and went to her Heavenly home after enduring a couple of T.I.A’s over the past year and a massive stroke on April 2, 2022. Anna was a resident of Johnson City since 1958. She was born and raised in the Peachtree Community of Murphy, NC, to the late Carolyn (Callie) Farmer Stiles and James Carl Stiles. Anna never lost track of her friends for life from Murphy, NC, talking with many of them weekly and some daily. Even though she was still grieving over the recent loss of her 67 plus year marriage to her husband, Verlon. She was really hopeful that she would be well enough in the next few months to attend the decoration of graves services for her family members and her class of 1952 70th reunion for the Murphy High School “Bulldogs.” Anna became a member of North Johnson City Baptist Church during the 60’s as the church was being founded and she was a faithful member attending regularly for 50 plus years. She really enjoyed and treasured all of her church family and friends. Anna was selected from her high school shorthand and typing class to work with Mrs. Ivie in the business office of Ivie Funeral Home during high school and for approximately 2 years full-time after high school. Her first job with Ivie Funeral Home was a big start to defining her career. She moved to Baltimore, MD and worked in the accounting department for Baltimore Aluminum and later for Martin Aircraft. After Anna and Verlon moved to Johnson City in 1958, she went to work in the credit department for Summers Hardware and Supply Company and retired as their credit manager after 40 plus years of service. The owners of Summers Hardware were always very appreciative of the rapport she demonstrated with her co-workers and especially their customers. Occasionally when customers would be in trouble with their books she would travel to visit them and help them get everything straightened out. She also enjoyed bowling for Summers Hardware Industrial League Team. Anna was also known as the business person of her family and able to tackle most any type of issues that occurred. Prior to and after her retirement she really enjoyed the opportunity to be a special and dear Nana to her grandkids (Dustin and Leah) taking them to church and Bible school, feeding the ducks, trips to the parks, Dairy Queen visits, picking them up from school and sleepovers. As they got older, attending several of their soccer, baseball, softball and basketball games, thru elementary, junior high and high school activities, along with Verlon. Later in life her grandkids drove her and Verlon to a Braves game in Atlanta, which they truly enjoyed and spoke of often. Anna’s other side job that consumed many of her hours while she was working and especially during her retirement, “that she loved doing and teaching her family” was cooking and canning all the fresh vegetables that Verlon raised in their garden for 55 years. Suppers after work, anniversaries, birthdays, dinners after church “every Sunday,” Thanksgivings and Christmases were all so special and especially her made from scratch Italian cream cakes at Christmas time. Special thanks to all the local doctors, their staff and healthcare providers that cared for her in Johnson City, namely, Dr. Bailey, Dr. Grosserode, Dr. McCurley, Dr. Chang, Dr. Bernes, Dr. Tom Huddleston, Dr. Lee, Dr. Anderson, Dr. Holt, Dr. Westmoreland, Dr. Michael, Beth Dolinger and Jay Penny with Home Health Care. Also, special thanks to Ann Garland who helped Anna in her later years with her house needs. Peggy and Lora at the House of Perfection that she always looked forward to seeing weekly to have her hair and nails done. She always looked forward to all her friends and neighbors that stopped in to visit, brought food or just came by to check on her and Verlon during the last few years of their lives. Anna always said “a person preaches their funeral while they are living.” We were all blessed with a Godly mother, wife to her husband Verlon, “who she loved dearly,” Nana and friend to many that she truly lived and provided “a great life for others.” Anna was preceded in death recently by her husband, Verlon R. Henson and brother-in-law, Doyle Henson, brothers, James Bruce Stiles and wife Margie and Lake Stiles. Anna is survived by her son Perry and wife Terry Hundley Henson; grandchildren “who always lit up her world,” Dustin Henson and girlfriend, Myka Baker, Leah Henson Frazier and husband Jacob; niece, Carol Stiles Bailey and husband Ray; nephew, David Stiles and several great nieces and nephews. For those of you that would like to attend the family of Anna Ruth Henson will have a graveside service at 2pm, Thursday, April 7th, 2022 at Washington County Memory Gardens with Pastor Rick Powell and Rev. Ray Bailey officiating, with pallbearers to be selected from friends in attendance. Memories and condolences may be shared at www.tetrickfuneralhome.com. Tetrick Funeral Services 3001 Peoples Street Johnson City, TN 37604 (423-610-7171) is honored to serve the Henson Family.

Anna Ruth Stiles Henson, born January 6, 1934, passed away peacefully at JCMCH and went to her Heavenly home after enduring a couple of T.I.A&#8217;s over the past year and a massive stroke on April 2, 2022. Anna was a resident of Johnson City... View Obituary & Service Information

The family of Anna Ruth Stiles Henson created this Life Tributes page to make it easy to share your memories.

Send flowers to the Stiles family.