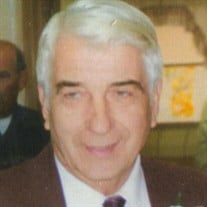 SHALERSVILLE Alvin Milton Mills, age 93, of Shalersville, Ohio went home to be with his Lord and Savior Jesus Christ at his son’s residence in Elizabethton, Tennessee on August 1, 2020 following a brief illness. Alvin was born on December 7, 1926 in Portage County, Ohio and was the first of five children of the late Kenneth John and Harriet (Starr) Mills. Alvin had moved to Elizabethton, Tennessee two years ago to be with his son, Dan W. Mills. After serving his country in the Navy during World War II, Alvin married his high school sweetheart, Ruth Snyder on October 19, 1946. Alvin and Ruth bought and established their first and only home at 8935 Infirmary Road where they entertained and fed hundreds of friends and family members for over sixty years. Alvin joined his father and was later joined by his brother Larry to run the family Maple Valley Farms. Alvin served his community by driving a school bus for the Crestwood School System for many years. As the demands of the farm increased, Alvin’s wife Ruth agreed to become his substitute bus driver. Alvin and Ruth were long time members of the Christian and Missionary Alliance Church where Alvin was very active teaching Sunday School, leading music, and being an Elder. Alvin loved his Lord and Savior Jesus Christ more than life itself. It has been his prayer that his sons, grandchildren, and grandchildren followed in his steps relating to his faith in God and would experience the personal relationship with Jesus Christ that he has enjoyed throughout his life. Psalms 116:15 says it all about Alvin; “Precious in the sight of the Lord is the death of his saints.” Alvin is survived by his son, Dan (Dale) Mills of the home, a brother Larry (Rhonda) Mills, a sister Wilma (Maurice) Radcliffe, foster sons - Joe (Diane) Ramos, Pete (Susan) Ramos, and Lew (Vickie) Ramos, Ronnie Bevilacqua, his loving grandchildren - Kimberly Towle, Jon Mills, Teri Ramos, Michael Ramos, Halsey Ramos, Leonda Broderick, Christi Myers, Becky Korinko, and 18 great grandchildren. Alvin was preceded in death by his wife, Ruth Helen Mills, a brother, Max Mills, a sister, Marilyn Stewart, a grandson, Dan William Mills Jr., and a niece, Tammi Ruth Stewart. A graveside service for Alvin will be held on Saturday August 8, 2020 at 11:00 A.M. in the Riverside Cemetery in Shalersville Township, OH with Rev. Keith McKnight and Rev. David Oreskovic officiating. Family and friends are invited. Full military honors will be provided by the U.S. Navy Honor Guard Team, assisted by members of Mantua American Legion Post No. 193. A Celebration of Life Service with Rev. Keith McKnight and Rev. David Oreskovic officiating will be held on Saturday August 8, 2020 at 2 P.M. at the Crossroad Community Church of the Christian & Missionary Alliance, 9018 St. Rt. 44, Ravenna, Ohio 44266 Public is invited, “In lieu of flowers, the family requests that gifts in memory of Alvin M. Mills be sent to The Moody Bible Institute, 820 N LaSalle Blvd., Chicago, IL 60610, to be added to the Dan William Mills, Jr. Scholarship fund.” Arrangements are by the Green Family Funeral Home & Crematory Service in Mantua where his video tribute, condolences and memories may be viewed at www.greenfamilyfuneralhome.com.

SHALERSVILLE Alvin Milton Mills, age 93, of Shalersville, Ohio went home to be with his Lord and Savior Jesus Christ at his son&#8217;s residence in Elizabethton, Tennessee on August 1, 2020 following a brief illness. Alvin was born on December... View Obituary & Service Information

The family of Alvin Milton Mills created this Life Tributes page to make it easy to share your memories.

Send flowers to the Mills family.