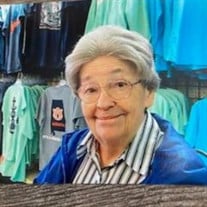 Alice Brady Davidson, 88, of Johnson City, Tennessee, died on December 1, 2021, at Abundant Christian Living Community in Johnson City, Tennessee. She was preceded in death by her son, James Davidson, parents Mr. and Mrs. George W. Brady Sr., and Sister Shirley Caruso. Alice was a native of Chicago, Illinois. She and her family moved to New Jersey in 1949. She met her future husband, Robert (Bob) Davidson, in May, 1954 at a church picnic. Bob had arrived in New Jersey just five weeks earlier from Fort Payne, Alabama, having taken a position as electrical engineer with Radio Corporation of America. They were married December 1956 in Orange, New Jersey. Alice and Bob moved to Bristol, Tennessee, in 1960, and lived there until moving to Johnson City in 2002. Alice graduated from East Tennessee State University with a BS degree in Education in 1976. She was a dedicated and loving mother to Karen and Jim and a devoted wife to Bob. Alice was a member of Woodlawn Baptist Church, Bristol, TN, where she was the church Library Media Director and taught the Ladies 5 Sunday School Class for several years before moving to Appalachian Christian Village (Abundant Christian Living community) in 2002. She joined Skyline Heights Baptist Church in Johnson City, TN and taught the Willing Workers Sunday School class for several years. Alice was a devout Christian and the family takes comfort in knowing she is now a member of the choir in heaven singing praises to God through her Lord and Savior. Survivors include husband, Robert (Bob) Davidson of the home; daughter, Karen Davidson of Tampa, Florida; daughter-in-law Dina Davidson of Bristol, Tennessee; three step-grandchildren, Erin Sheppard, Andrew Sheppard, and Christopher Sheppard; brother and sister-in-law Rev. George and Jean Brady of Farmer City, Illinois; sister and brother-in-law, Virginia and Sal Domenic of Lakewood, New Jersey; sister Peggy Schoen of St. Ignatius, Montana; brother and sister-in-law Charles and Ave Brady of Stanhope, New Jersey; and several nieces of nephews. The family wishes to express special thanks to the doctors, nurses, and staff of the Abundant Christian Living Community for the wonderful, loving care they gave Alice while she was there. Interment will be at Washington County Memory Gardens in Johnson City. There is no planned public memorial. In lieu of flowers, please consider making a memorial donation to Skyline Heights Baptist Church, 1601 Skyline Drive, Johnson City, TN 37604.

The family of Alice Brady Davidson created this Life Tributes page to make it easy to share your memories.

Send flowers to the Davidson family.